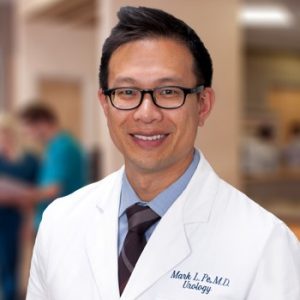 A native Southern Californian, Dr. Pe grew up in Loma Linda, and went to college in Los Angeles. He earned his bachelor’s degree in microbiology and molecular genetics and master’s degree in physiological science at the University of California, Los Angeles in 1999. He received his medical degree at Jefferson Medical College in Philadelphia in 2004.
After medical school, Dr. Pe completed his residency in general surgery and urology at Thomas Jefferson University Hospital in Philadelphia in 2010. During his residency, he trained under Dr. Demetrius Bagley, a pioneer and a leading authority of endourology and kidney stone disease.

Dr. Pe is a member of many professional organizations such as the American Urologic Association and the San Diego Urologic Society. He has also authored numerous abstracts, peer-reviewed publications, and book chapters, and has presented his findings at both national and international medical conferences.

In his spare time, Dr. Pe spends his time enjoying the perfect San Diego weather and lifestyle. He is also an avid sports fan and enjoys outdoor activities like surfing, playing tennis, and running. Most importantly, Dr. Pe especially loves spending time with his wife Kate and playing with their two sons, Noah and Alex.

Dr. Pe is an advocate of minimally invasive treatment for both benign and malignant urologic diseases. He has trained on the da Vinci surgical robot and is part of the Scripps Minimally Invasive Robotic Surgery team. Dr. Pe also has a particular interest in endoscopic treatment of stone disease and laser treatment of the prostate for BPH.